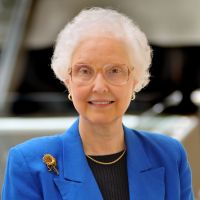 Fellow, American Association for the Advancement of Science

The Butel laboratory studies the biology and molecular biology of the polyomaviruses, with a primary focus on polyomavirus SV40. Originally isolated from monkeys, SV40 is a small DNA virus that is able to transform cells in culture and induce tumors in hamsters. As a model tumor virus, SV40 has provided many fundamental insights into the molecular basis of carcinogenesis.

The large tumor antigen (T-ag) of SV40 is the major transforming protein of the virus, responsible for tumor causation in hamsters and transformation of many cell types in culture. It is a complex protein that possesses multiple functions important for replicating the viral DNA and for dysregulating cell cycle control. Sequence analysis of viral isolates has revealed differences in the structure of the noncoding viral regulatory region as well as the existence of a variable region at the C-terminus of T-ag that can classify SV40 strains into genogroups. We have identified rare variants of polyomaviruses, recovered from immunosuppressed hosts, that have lost the ability to express viral microRNAs.

We have developed the Syrian golden hamster small animal model to study SV40 pathogenesis of infection and disease. Recent results from the hamster model identified broad tissue tropism for SV40 and provided the first evidence of expression and function of SV40 microRNA in vivo. Viral microRNA reduced viral DNA levels in infected tissues and may contribute to the establishment of persistent infections. Other findings include the significant effect of the structure of the viral regulatory region on both oncogenic potential and vertical transmission in vivo. As there was no effect on transforming activity in vitro, strain-specific factors must affect virus–host interactions that are not detectable using cultured cells. Both viral genetic variation and route of inoculation influence host antibody responses to viral proteins.

Authentic SV40 can cause human infections. Findings from our studies include the detection of SV40 neutralizing antibodies in various population groups; the fecal excretion of polyomaviruses by humans, indicating a probable fecal–oral route of transmission; the detection of SV40 in normal and malignant lymphoid-rich tissues, suggesting that lymphoid cells are important in the pathogenesis of SV40 infections; and the variable frequency of SV40-positive lymphomas in two urban populations, emphasizing that SV40 infection and disease likely reflect population differences. The interaction of SV40 with human lymphocytes is under study.