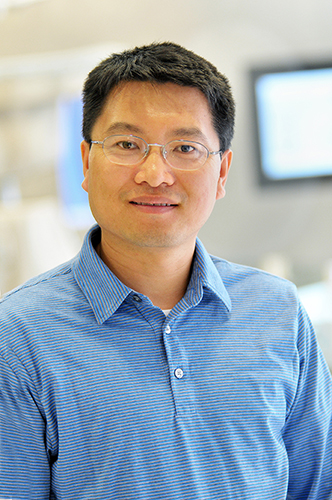 Genetics of human inherited retinal degenerative diseases: Collectively, ocular diseases affect large population in the world; 40 million people are blind and another 100 million have substantial visual impairment. Together with our collaborators, we are currently working on identifying genes involved in various inherited retinal diseases (IRD), such as Leber congenital amaurosis (LCA), Usher syndrome, retinitis pigmentosa (RP), cone and rod dystrophy and Stargardt’s disease. So far, we have recruited over 7,000 patients with IRDs across the world. A combination of next generation sequencing (NGS) based panel, whole exome and whole genome sequencing has been conducted. These efforts have led to accurate molecular diagnosis of about 70% of the patients. In addition, we have identified and published 15 new IRD associated genes. Continued investigation of underlying genetics of unsolved IRD patients is one of our main focuses, including but not limited to identifying novel IRD associated genes, improving our ability to identify and interpret complex or non-coding mutations and exploring digenic and oligogenic complex inheritance.

Molecular mechanisms and novel therapeutic of retinal degenerative diseases: We will use mice as the model to investigate molecular mechanism of IRD diseases. From the list of novel IRD genes identified in our group, we have selected and generated knock out and/or knock in mice models for several genes, such as Spata7, Cwc27 and Reep6, that are either currently under investigated or represent new genetics pathways. A combination of genetic, genomic and biochemical approaches is used to characterize these mouse models and elucidate underlying molecular mechanism of the disease. In parallel, using the engineered mice as the model, we have performed rAAV-based gene therapy. Furthermore, we are exploring the idea of developing a novel therapy method that can address a significant portion of IRD patients by targeting converging pathways and/or downstream effector genes. Finally, a cell-based therapy approach also is being explored.

New non-human primate model for human diseases: One major limitation to the development of effective therapies is the use of animal models that poorly replicate human conditions. Well-defined NHP models that are more predictive of human conditions are necessary to more efficiently advance new therapies. In collaboration with multiple primate centers across the country, we have conducted molecular screening for over 2,000 individual monkey carrying spontaneous mutation in IRD and other human diseases. We have now identified and established the breeding colony carrying PDE6C mutations. In addition, carriers with mutation in many genes associated with IRD and other human diseases have been identified. These models will serve as an invaluable resource for future therapy development and mechanistic studies.

Single cell genomics and Human cell atlas: Single-cell omics is a rapidly growing new field that provides many advantages over traditional ‘bulk’ tissue profiling methods, such as the ability to resolve intratissue heterogeneity in cell types, profile the disease microenvironments, and study rare subpopulations. Over the last several years, single-cell genomic and transcriptome methods have had a major impact on many areas of biomedical research. In addition to single cell genomic and transcriptome methods, additional omics technologies, such as chromatin profiling, DNA methylation and proteomics, are under rapid development. Together these single-cell omics technologies are becoming essential tools that are revolutionizing many diverse fields of biomedical research. Our lab has applied this emerging technology to our research and also is actively engaged in expanding the application and further developing the technology. We are funded by the Chan Zuckerberg Initiative (CZI) as part of the Human Cell Atlas (HCA) Seed Network project, particularly focusing on generating reference map for the human retina at the single cell resolution.